If I was to chose one and only one choice for dinner the rest of my free living spirit, the choice would fall on sushi, even though it's a though one to give up the Moab burgers...! 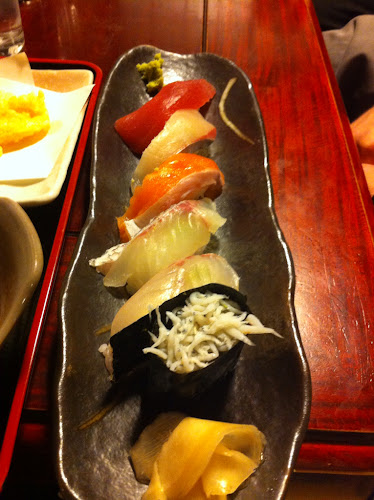 But any way, the raw consistence that the white magic powder produced by the vent jointure by the on one hand Siberian cold dry air and the other hand wet moisture air from the Japanese Sea can't be compared with any other area, exept maybe the Canadian Rockies... 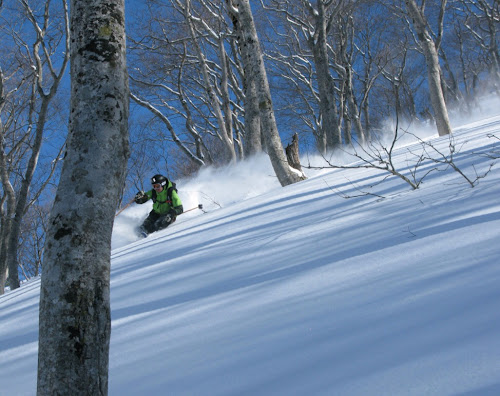 Tree skiing at its best, Goruy

The heavy snowfalls of Japan's snow country are caused by moisture-laden clouds bumping up against the mountains along the backbone of Honshū and releasing their moisture under the influence of easterly winds blowing off the continent or down from Siberia. As a result, the region includes some of the world's snowiest spots at the same latitudes, as well as the northern hemisphere's southern-most ski resorts
It's just an unbelievable combination stretch to perfectionism. Just raw powder at it's best - Sushi powder! 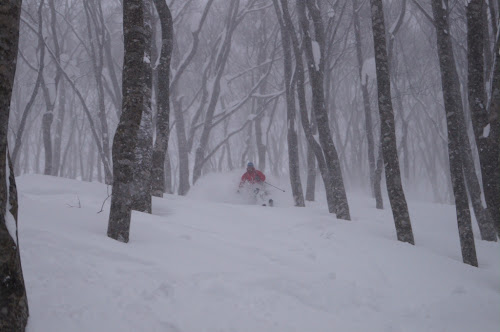 A normal skiing day in Hakuba

The key and answer to the huge amount of snow that the northern Island and the mountain range get in Japan is just that unique combination. South Korea on the other side of the Sea of Japan gets about 20-30cm of snow a year, the area around Hakuba gets between 800-1500cm! No wonder that the locals here are equipped with huge "snowslunges"
As long that the Siberian winter stay as it should be, delivering very cold temperature and the air masses meet up between Russia and Alaska pushing the cold air southwards via occlusion fronts the off-piste heaven remains 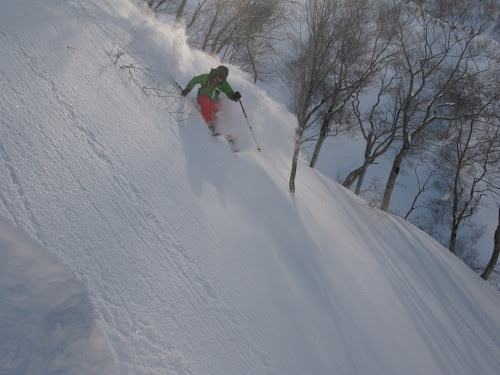 There are a several amount of famous areas to go to for free riding but the two most well known would probably be Niseko and Hakuba. The amount of snow is more or less the same but the terrain is a bit more interesting in the later. With skiing in every aspect and good variation in angle and formations, tree skiing and open terrain.
To get to Hakuba and Happone is best done with a flight to Tokyo, Haneda or Narita airports. Air France and Finnair has very good connections. Then it's a six hour transfer up to the mountains and Happone. So there is time enough to put the ski clothes on while on transfer... 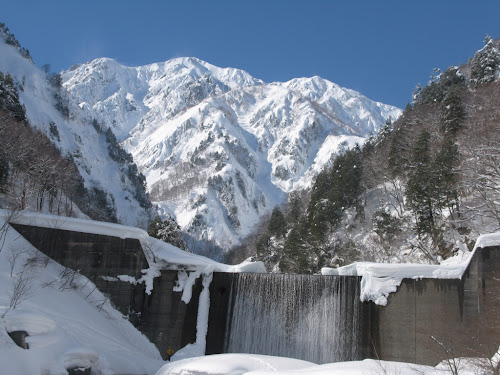 There is a lot of big runs around...!

For first timers it's a good idea to take at least a couple of days with a guide since its a big ski area and not always obvious where and when to go. One reason for this is the big amount of snow which also give cloudy weather with poor visibility and big danger of avalanches. The bigger areas of Happone and Guyru is also much protected from off pist skiing while there is less limitations in Cortina. So read and learn about the local rules before you break them. Often it cost you the lift pass.
The ski touring routes are numerous and specially on the spells between snowfalls it's a good oppertunity to go touring. Even when the snow is up to the knees it's just so soft so it dosnt make any differens to plod trough. The biggest issue is the lack of good maps to plan the route. The weather also changes very quick so be prepared to change planes or turn around. The help from the mountain rescue isn't close to the one found Inte Alps so the group should be able to rely on its own!

The skiing. Most of the areas are quite low in altitude with runs up to 8-900meters. The sun effect is very strong so often the south faces should be avoided or skied early in the day. The amount of depth hoar is huge with big cristals that easily collaps later in the day.
From the top of Happone, starting from "climbers exit", there is a nice ridge going up to the summit of mt Karamatsu, Latitude:36.69609 Longitude:137.79156. Which gives a lot of nice runs all the way back to the valley, either south or north. . Just remember to fill in the papers at the top before leaving in case of an injury. If not you might end up with a fine from the police if you need rescue or help, maybe not so fun if it's on top of a broken leg..!
Two other nice touring days are from the top of Guyru. Starting from the telecabin and one chair lift to the summit. A 30min of skinning takes you up to the 1850m point from where it's perfect tree skiing all the way down to the valley and the river. Which has to be crossed, so bring plastic bags for the shoes. Then it's a little workout back to Hakuba 47 or it's also possible get direct back to Happo via some small roads on skis. Ending up just below the 1998 Olympic long jumping slopes
And, from the Tsugaike ski area there is also an tour easily reached via two lifts, where the first one funnily takes the route past the top and down on the back side so you need to take a chair lift up again to almost the same place. Annoying but different. A well planned day and you can ski from Tsugaike to Cortina with about 300m uphill and 900m downhill. Take a bath at the Onsen (the second best Onsen) at the resort hotel in Cortina and the five a clock bus back to Happo. For smaller groups there is a lot of Big mountain skiing and first descents from the huge amount of peaks around. With runs more than 1500 mts vertical
The culture. Skiing in Japan is just about that, so much more than just the snowy powder. The food, the easy accessed mountains and the natural hot springs. A day isn't complete with out a visit to any of the big numbers of Onsen and some Kumchi, Sushi or sweet rice bolls 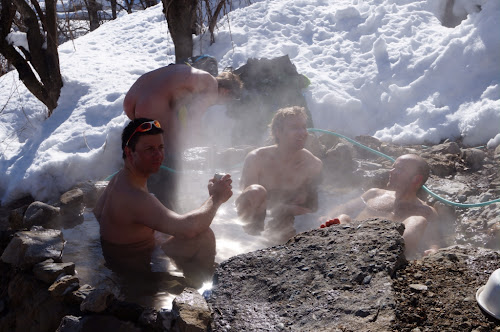 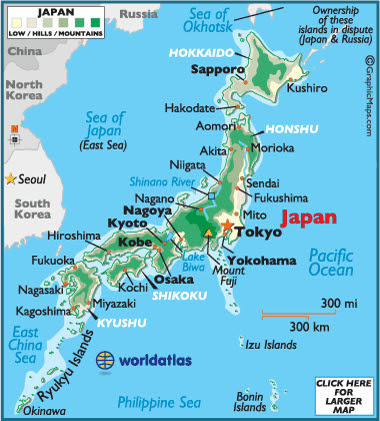 Best time, late December to end of February, biggest dumps often in January
Flight, to Haneda or Narita are the biggest ones
Transfer bus, Chuo Highwaybus, cost about 5000¥. Need to book in advance via Turist information, takes about 6-7h with 2-3 stops

ABS and Snowpulse packs. ABS ain't allowed in Japan. You can however bring it with but make sure to bring extra handle and tube since its not possible to any new one

Cash and Cards. Some restaurants accept Visa/Mastercard, some don't so it's vise to have cash. Same for taxi use

And, dont miss the Kurashita no yu Onsen outside Happo? The nr1 Onsen around and a little bit different from most others

Contact Alpine Madness to get an offer to your powder week 2014 in Japan
info(x)alpinemadness.se 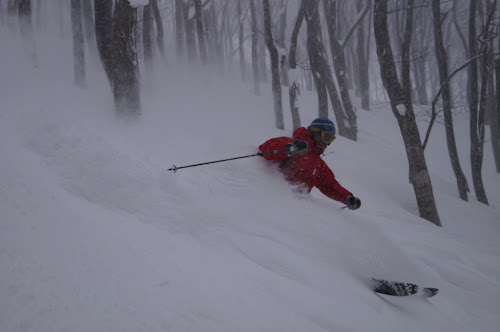 One thing is pretty clear though, it's gona be more trips here...